The Downfall of the Western Church

“Thus says the LORD, ‘For three transgressions of Tyre and for four I will not revoke its punishment, Because they delivered up an entire population to Edom And did not remember the covenant of brotherhood.’” – Amos 1:9

“Behold, this was the guilt of your sister Sodom: she and her daughters had arrogance, abundant food, and careless ease, but she did not help the poor and needy.” – Ezekiel 16:49

The relevance of the Christian faith in Western Europe is easily detected in socio-philosophical discussions when those societies are regularly posited as post-Christian. While the influence of the Judeo-Christian heritage remains in many public institutions, the further transformation of society has languished as it has succumbed to the worry of the world and the deceitfulness of riches (Matthew 13:22). These influences are affecting the Church in the United States as well as our society pursues government intervention to resolve social ills or worships the golden calf (bull statue prominently displayed on Wall Street just north of Bowling Green Park in Manhattan) as our deliverance from evil. 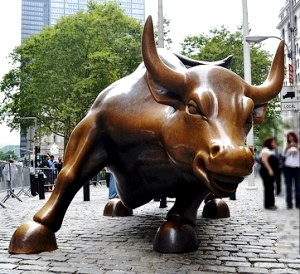 I explore the indictment of Tyre (Ezekiel 28) at some length in my book, Eden’s Bridge: The Marketplace in Creation and Mission.

“By the abundance of your trade You were internally filled with violence (chamas)” – Ezekiel 28:16. Chamas (Strong’s 2555) is most often translated in the Old Testament as violence (as maltreatment) but also means malicious, cruel, and pertains to unjust gain, all implying to wrong someone else.

Much of the Christian faith in the United States has fallen victim to self-delusion and is practicing what Paul labels as holding to a form of godliness while denying its power. It is a false religion.

“For men will be lovers of self, lovers of money, boastful, arrogant, revilers, disobedient to parents, ungrateful, unholy, unloving, irreconcilable, malicious gossips, without self-control, brutal, haters of good, treacherous, reckless, conceited, lovers of pleasure rather than lovers of God; holding to a form of godliness, although they have denied its power; and avoid such men as these.” – 2 Timothy 3:2-5

If there is any question as to this truth, we have merely to look at our society and see the multitude of debilitating issues – crime rates, abortion, cohabitation and single parenthood, economic disarray, income and wealth inequity, government corruption, divorce, sports and media star worship, sex and human trafficking, and the list goes on and on. How is the presence of these things an indictment of the church? Hear the words of Jeremiah:

And then God says perhaps the scariest thing of all to Jeremiah:

“As for you, do not pray for this people, and do not lift up cry or prayer for them, and do not intercede with Me; for I do not hear you.” – Jeremiah 7:16

The social ills remain in our midst because the Church in the United States has bought into a false religion, one with no power. We cry out to God but our nation continues to slip into depravity.

“[If] my people who are called by My name humble themselves and pray, and seek My face and turn from their wicked ways, then I will hear from heaven, will forgive their sin, and will heal their land.” – 2 Chronicles 7:14 (emphasis mine)

When God’s people pray, He hears and answers the humble and righteous but resists the proud:

“The LORD is far from the wicked, But He hears the prayer of the righteous.” – Proverbs 15:29

“The effective prayer of a righteous man can accomplish much.” – James 5:16

So then, why is God not answering our prayers?

“You ask and do not receive, because you ask with wrong motives, so that you may spend it on your pleasures. You adulteresses, do you not know that friendship with the world is hostility toward God? Therefore whoever wishes to be a friend of the world makes himself an enemy of God. Or do you think that the Scripture speaks to no purpose: ‘He jealously desires the Spirit which He has made to dwell in us’? But He gives a greater grace. Therefore it says, ‘God is opposed to the proud, but gives grace to the humble.’” – James 4:3-6

I often hear zealous Christian rail against this thing or that proclaiming their right to be righteously angry, yet their lifestyles and choices simply reinforce the systemic evil that has cut off the poor and marginalized in our society. Gated-communities do not good neighbors make.

Are we, as the Church, even willing to hear the cry of the poor, the indicting cry of the Prophets and our Christ? Are we ready to take real action to demonstrate to the world that the way of the Cross and the love of God is real and better than the false security of the world and our transitory wealth.

Look around. We are living a false piety, a form of godliness with no power, based on bad theology. We must be willing to hear God’s voice and be willing to submit to His leading. WE must change to change the world.

6 responses to “The Downfall of the Western Church”